My Blog about the various things I like and some of the things I discover from time to time. 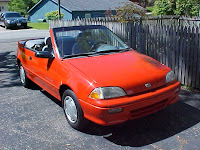 May 24, 2008 After 6 years of looking here, looking there, I took the plunge and bought a replacement for my 1993 Honda Helix motor scooter.
With gas going up the way it is, and not actually getting another scooter, to me, this is a middle ground, not a scooter, not quite a car, it is a car-scooter.
At 16 years of age, this little car is in very good shape, no rust at all, and just getting broken in at 133,850 miles.
I always wanted a convertible, and loved my scooter, so this is pretty cool.
I got it on eBay, and just a few days before the bidding was over, there were many articles in newspapers and magazines, about how the old Geo Metro's were making a 'comeback' due to the high gas prices, and how they got as good mileage and the new hybrids, and much less in price. So that made me a little panicky, but I also knew that the convertible's were and are becoming somewhat the collectors items now. So if I keep it in good shape it will only appreciate in value, so I can always get more than I paid for it. 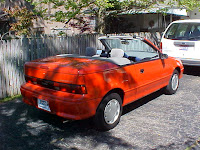 Years ago while delivering pizzas, I had a 86 Chevy Sprint beater car, that has the same engine as the 'Vert' so I was familiar with that. But this car is so much lower to the ground than I thought, we drove around on some back roads and I had to go slow over some hills as I can't see to far over them in case something is in the road.
And I found you better get the momentum up to go up hills, the max gross weight for passengers and cargo is 388 pounds, and I am about 310 so with my wife in the car it is over loaded already, but my scooter was that way too and we had fun on that.
We went about 125 miles and just 2 miles from home the engine started to overheat. After letting it cool down I made a dash for home and the next morning found that after I added water it ran out just as fast as I put it in. Hope it is just a bad hose, will see. 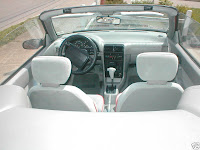 Update June 5, 2008 Usually blogs are updated day to day, but I am going to keep the Metro page on one big page, so those interested won't have to skip around. Any travel stories will be separate, so this will be a general page about costs, repairs and the such.
The overheating problem turned out to be the water pump, and the garage said the timing chain should be changed as well, so that was done.
But while out on our drive I found the left front wheel had a bad 'thumping' sound, so that involves a new 'rack' that is the various rods and elbows that involve the steering, no new ones were to be found, so a rebuilt one is on the way, $700.
The horn is about $40 for a short that was found in the wiring harness.
The a/c was converted over to R-134 approx. $200
And although the tires looked like they could go another year, I sprung for those.
So tomorrow they say it should be done, and will post the actual costs.
June 7, 2008 Got the car back from the shop, here are the totals:
$239 Water pump, timing belt, radiator
$503 Rack & Pinion + Tie Rods
$168 Tires
$479 Labor
So with various belts, fluids, fees taxes and the horn fixed, etc it was $1,668.13 Drives like a brand new car, and looks 98% like a new car, so I am happy.

June 7, 2008 1st fill-up after a 175 mile dead-head drive around Northern Ohio (lots of hills) we got 38 MPG
July 3, 2008
Alternator was screeching on startup, and when starting out with the lights on, so tightened belt, 5 days later, again, 5 days later again, and the last time the belt was stretched to the point that it could not be tightened again. So it was determined that the bearing was going bad in the alternator, so a new one was installed, with labor and tax $225.92
July 5, 2008
Just a few days after the alternator was replaced, right? Well, while about 40 miles from home on a relaxing Saturday drive I start loosing power, the tach goes to 0 when I put on the brake, but the motor is still running. I pull off to see if the (new) belt is still there, it is, but when I go to drive away it is stuck in park, not enough battery power to do that, seems the brake lights took power away from the sensor for the thingy that knows to release the shifter. So I had to have vert towed back to the garage, I have AAA at least I was glad for something, we will see what the garage has to say come Monday morning.
July 8, 2008
The 'new' alternator was bad, so they replaced it, crossing my fingers, again... 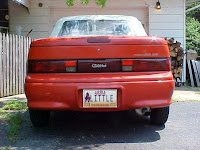 Hi there. I love your Geo Metro. Very cute! I especially like the canvas top. Where did you get it? Did you have to install it yourself? I'd love to get a canvas top for mine, but I've had no luck finding a place that sells/makes them. If you could send me details about how/where you got it, how much it cost, how difficult it was to install, I'd truly appreciate it. Thanks, brigittejohnston@gmail.com

Great car ! I have one like yours with 186 k . I also had to replace the rack & pinion 1 month ago . I bought it at Auto Zone for $385 with a $65.oo core charge here in S.Carolina . If it's not too late maybe you can check them out.
Geo Metro Convt. Fan from S.Carolina

Great car ! I have one like it with 186 k . I also had to replace the Rack & Pinion . I got it at Auto Zone for $385. with a core charge of $65.oo. the Date on your post tells me it's too late to help you with this . I just replaced headlight combination switch. Talk about a hard part to find ! I went on partrequest.com and did a nationwide search and they foud a used one only a 100 miles away & I got it the next day ! God Luck with you geo I will most likely never sale mine.
Geo Fan

Marty in the Morning Show
(Click the Play Arrow)

My DVDs On Sale